Battery degradation is an irreversible loss of the ability of a battery to store charge. Such phenomenon permanently reduces the capacity of the battery to store energy, and the power delivery of the system. It can also be defined as an Irreversible reduction of the rate at which electrical energy can be accepted or released by the battery.

The health of the battery is referred to as State of Health (SOH). A new battery has 100% SOH, and with the passage of time and battery usage it gradually decreases or degrades. One thing must be noted is that SOH is not the same as vehicle range, as vehicle range depends more on battery and system temperature, driver behavior, charging level, and cargo load. When considering this, vehicle range can fluctuate between different values of ranges but once the SOH decreases it can never return to the initial peak range associated with 100% SOH.

The Following factors negatively affect the working cycle of a battery:

Quick charging for an EV utilizes direct electrical current (DC). This process consists of a direct current fast charger, or DCFC, converting the power from an alternating current (AC) into DC. After conversion, the power enters the car’s battery directly, circumventing the use of an inverter.

Furthermore, A DC installation necessitates a significant amount of grid electricity (around 125 A). As a result, its operating costs including, production, installation, and operation are notably high. This results in higher charging tariffs. However, since it normally allows for much quicker charging, it is the preferred charging method for long-distance trips (for cars that support DC charging). DCFC of charging stations can be found on highways and at locations along other high trafficked roadways.

This method of charging is quite common in the EV charging space. When an electric vehicle is plugged into a standard AC charging station, the power is converted inside the vehicle, through an inverter, and then transferred to the car battery. Charging speeds are determined by the charge point’s output power as well as the invertor’s ability to convert the power to DC. Charge times using an AC charging station are considerably slower compared to a DCFC charging station.

Battery Degradation Due to DCFC Charging

The use of DCFCs have a greater affect on the the rate at which batteries degrade compared to AC chargers. Rapidly charging a battery results in higher currents and higher temperatures, all of which are known to put pressure on batteries. Several automakers recommend restricting the use of DCFCs to extend the battery life of their vehicles. However, most of the new modern EVs like the Porche Taycan and newer Tesla models come equipped with the latest technology designed to withstand fast charging at a constant rate of over 200kW. It should be noted that DCFCs effect the battery more in hotter climates. As we know, batteries have internal resistance and once high current from a DCFC flows to it, the high current paired with internal resistance produces a large amount of heat. In a hotter climate, the heat from charging combined with the environment’s temperature adversely influences the life cycle of an optimum battery. It can be concluded that DCFCs do not adversely affect the battery in moderate environments as compared to hot environments. 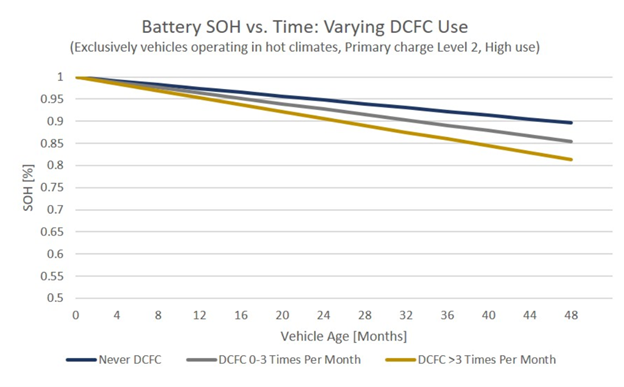 Level 2 AC chargers operate at 200 to 240 volts and have an output range of 3 to 19 kilowatts. Such L2 AC power can add 18 to 28 miles worth of charge per hour to an electric vehicle. The charging power is optimum for the battery and barely degrade its state. The only downside is the charging speed. Level 2 charging stations are very common and can be installed for both public and at home use, as most of the circuity comes built in with the vehicle. This makes the installation process is reasonably simple. Most electric vehicle owners opt for level 2 AC chargers for their at home charging needs, as they intend to fully charge the EV overnight.

Overview of battery deterioration due to fast charging:

The battery chemistry influences an electric car’s ability to accept higher charge currents. The conventional wisdom in the industry is that faster charging accelerates the pace at which an electric vehicle’s battery capacity degrades. However, according to a study conducted by the Idaho National Laboratory (INL), if an electric car’s only power source is DCFC, the battery would deteriorate faster.

The INL put two Nissan Leaf EVs from the 2012 model year through their paces, driving and charging them twice a day. Two were recharged using 240-volt “Level 2” chargers, like those used in garages, while the other two were taken to Level 3 charging stations. Over the course of a year, they were each driven on public roads in the Phoenix, Arizona area. They were all tested under the same parameters, with the same group of drivers piloting all four cars and their climate control systems set to 72 degrees. The battery capacity of the vehicles was measured at 10,000-mile intervals.

It should be observed that most of the INL’s testing over the 12-month span took place in the high temperature climate of Phoenix, which can inherently shorten battery life, as can the deep charging and discharging needed to keep the 2012 Leaf going.

Thus, from the above study it can be concluded that the direct current fast charging may have a slight contribution to battery degradation, but not by an astronomical amount. Certain factors such as, environmental temperature, battery usage and age of battery also contribute to degradation of the battery.  Frequent charging of an EV through DCFC will not affect its performance if the environmental conditions are optimum. Most recent electric vehicle models come with precooled and preheated battery technology which maintain an optimum battery temperature. so that DCFC has minimum effect on it.